The CDQ program is designed to: 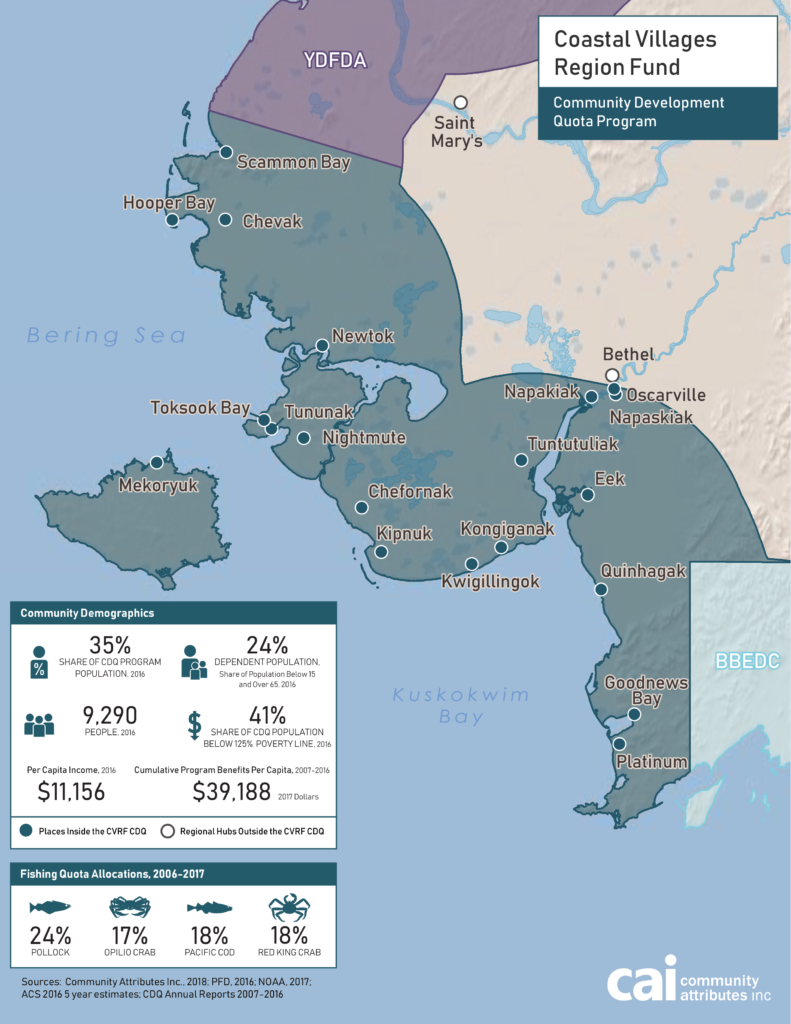 The CDQ program was authorized under the Magnuson-Stevens Fishery Conservation and Management Act, section 305(i)(1)(D). This legislation, commonly referred to as the Magnuson-Stevens Act, enables a portion of fishery quotas to be solely used by six non-profit corporations, representing 65 western Alaska communities. CVRF is one of those six entities which manages and administers its CDQ allocations, investments, and economic development projects for the 20 member communities it serves. Over the years there have been amendments to the legislation and changes to the CDQ program; at CVRF, we believe there is more work to be done to ensure the CDQ allocations are fair and balanced. To learn more about the allocation situation, visit the Fair Allocations page. Scroll down to learn more about the history and evolution of the Western Alaska CDQ program.

After attending U.N. Law of the Sea discussions, U.S. Senator Ted Stevens proposed legislation in 1971 to unilaterally extend U.S. jurisdiction over fishery resources out to 200 miles. Stevens believed that the Law of the Sea (which included the concept of 200-mile EEZs for coastal countries) would take too long to be ratified and had doubts about the strength of its conservation provisions. In the early-1970s, the major industrial groundfish fisheries off Alaska were dominated by foreign fishing vessels from Japan, Russia, Poland, Korea, and elsewhere.

The Fisheries Conservation and Management Act (later renamed the “Magnuson-Stevens Fishery Conservation and Management Act”) was enacted by Congress in 1976 and unilaterally extended U.S. jurisdiction over fishery resources to 200 miles from shore. Senator Stevens and Senator Warren Magnuson (WA) played key roles, as did Congressman Don Young and Congressman Gerry Studds (MA) in the House. Eight regional fishery management councils were created to recommend fishery management plans to the Secretary of Commerce. The North Pacific Council thereafter began work to “Americanize” the federal fisheries off Alaska. Senator Stevens secured an Alaska majority on the North Pacific Council (6 AK members and 5 non-AK members) which created the opportunity for Alaskans to begin to participate in the new federal fisheries.

Throughout the 1980s, the North Pacific Council provided small amounts of Bering Sea fishery resources to western Alaskans, primarily halibut for small local vessels. While a good precedent, Western Alaska was otherwise largely being left out as joint ventures were giving way to the operation of U.S.-flagged fishing vessels in the Bering Sea. Western Alaskans lacked the capital necessary to enter these fisheries.

In reaction to calls for help for western Alaska, Sen. Stevens introduced legislation (Section 20 of S. 1900) on November 17, 1989, to mandate the creation of a CDQ program for Western Alaska. More than 10 years after the enactment of the 200-mile law, there was still almost no Alaskan ownership in the Bering Sea fishing fleet. Section 20 of S. 1900 was not enacted, but Senator Stevens’ support for a CDQ program fortified CDQ efforts in Alaska and at the North Pacific Council.

In 1991, the North Pacific Council proposed to divide the Bering Sea pollock fishery between the inshore (35%) and offshore (65%) sectors. As part of this package, Alaskan members of the North Pacific Council demanded an allocation of BSAI pollock for Western Alaska. The Council approved an allocation to CDQ of 7.5 percent of the annual total allowable catch of BSAI pollock. “Inshore/Offshore I” was approved by the Secretary of Commerce in time for the first harvest of CDQ pollock to begin in the fall of 1992. The CDQ allocation under “Inshore/Offshore I” was the official start of the CDQ program, establishing the precedent and framework for allocations of other species to the CDQ program. The 1992 CDQ framework was the same basic framework that remained in place for almost 15 years in terms of the preparation of community development plans (CDPs), the involvement of the Alaska Governor in reviewing CDPs and setting allocations among the CDQ groups, and the basic parameters of the CDQ program. While some of the six CDQ groups have restructured since 1992, all six represent the same basic interests as when originally formed to harvest CDQ pollock in 1992.

The allocation of BSAI pollock to the CDQ program was extended once by the North Pacific Council (1995 Inshore/Offshore II), then separated by the Council from the Inshore/Offshore package (and its sunset dates) just before being given permanence and an increase by Congress under the American Fisheries Act (see below).

Led by Senator Stevens and Congressman Young, Congress enacted legislation (P.L. 104-297, the Sustainable Fisheries Act) to create a new CDQ section of the Magnuson-Stevens Act. The new section (section 305(i)(1)) required the establishment of the western Alaska CDQ program and required that a percentage of each Bering Sea fishery be allocated to the CDQ program. Section 305(i)(1) also required the following:

Senator Stevens and Congressman Young named the 1996 CDQ amendments after Harold Sparck, a western Alaskan and long-time CDQ proponent and visionary who had recently passed away. Besides creating a new CDQ section of the MSA, the Sustainable Fisheries Act (section 108(h)) also required the National Academy of Sciences to prepare a comprehensive report on the CDQ program (see “The Community Development Quota Program in Alaska (1999)” at www.darwin.nap.edu).

Allocations of BSAI non-pollock groundfish (cod, mackerel, flatfish, and rockfish) were recommended by the North Pacific Council in the mid-1990s as part of the groundfish and crab License Limitation Program (LLP). CDQ fishing for these “multi-species” groundfish began in 1998.

Allocations of BSAI crab were also recommended by the North Pacific Council in the mid-1990s as part of the License Limitation Program (LLP). In 1996, Congress directed the Secretary to approve the crab CDQ allocations, but with a phase-in of 3.5% in 1998, 5% in 1999, and 7.5% in 2000 and thereafter. As with CDQ multi-species groundfish, CDQ directed fishing for crab began in 1998. With the addition in 1998 of the crab and multi-species CDQ allocations, western Alaskans were finally participating in all of the major federal groundfish fisheries in the Bering Sea and Aleutian Islands.

As part of the 1998 American Fisheries (section 206(a)), Congress mandated that the CDQ allocation of BSAI pollock be increased to 10 percent of the annual catch (up from 7.5 percent) and that this 10 percent be treated as a “directed” catch, with additional pollock to be provided to the CDQ program for pollock bycatch needs in other CDQ groundfish fisheries. The purpose of the pollock increase was to compensate for the expected increase in the cost of entry from the fishing quota cooperatives that would be formed under the AFA. By providing more pollock, Congress intended for western Alaskans to be able to continue to expand, in spite of having to now pay to buy “quota” from existing participants.

The AFA not only increased BSAI pollock allocation to the CDQ program, it also created a new CDQ program (section 211(e)) to assist CDQ groups in purchasing fishing vessels and processors in the BSAI pollock fishery. The initial loan authority was for a total of $25 million. None of this loan authority was used, however, due to a combination of excessive agency red tape, the somewhat ready availability at the time of decent private sector loans, and the insistence of NMFS to have preferred mortgage on vessels, even where the CDQ group was only to be a minority owner.

Under the 1996 Sustainable Fisheries Act, Congress directed the National Academy of Sciences to conduct a comprehensive review of the CDQ program. In its 1999 report to Congress, the Academy/National Research Council recommended the following:

In February of 2001, Congressman Don Young introduced legislation (H.R. 553) to amend the CDQ section of the MSA (H.R. 553 was similar to a bill (H.R. 5565) that Rep. Young introduced October 26, 2000 in the final weeks of the previous Congress). While neither H.R. 5565 nor H.R. 553 was enacted, Rep. Young’s proposal helped shape the emerging debate about changes to the administration of the CDQ program. H.R. 553 proposed the following:

In June of 2002, the North Pacific Council recommended changes to the CDQ Program based on its review of the NAS CDQ study (see above), the CDQ Committee report (see above), Rep. Don Young’s proposed CDQ legislation (see above), proposed State regulations, and public comments. The recommendations were as follows:

Little of the Council’s motion was ever implemented.

As part of the BSAI crab IFQ/IPQ program — which was recommended by the North Pacific Council between 2002 and 2003, and mandated by Congress in 2004 — the CDQ allocation of BSAI crab increased to 10 percent (up from 7.5 percent). Additionally, the crab IFQ/IPQ program created 10 percent CDQ allocations in the Aleutian Islands golden king crab and western Aleutian Islands red king crab fisheries, fisheries in which there had not previously been allocations to the CDQ program.

On recommendation from the North Pacific Council, and in the aftermath of CDQ allocations proposed by the State of Alaska DCED Commissioner Edgar Blatchford, Governor Frank Murkowski appointed a CDQ Blue Ribbon Panel in the Spring of 2005, chaired by Ed Rasmuson. The Rasmuson Blue Ribbon Panel acted swiftly and drew in part from the previous efforts of the 1999 National Academy of Sciences CDQ report and the 2001 CDQ Policy Committee recommendations to the North Pacific Council. The Rasmuson Panel validated the acute need to remove State politics from the CDQ allocations process and to give CDQ groups and their communities greater autonomy while at the same time improving the “transparency” of the CDQ program for western Alaskans. The Rasmuson Blue Ribbon CDQ report was the basis for the amendments requested by CDQ groups and recently enacted by Congress (see below).

In the fall of 2005, Congress enacted amendments (in P.L. 109-108) offered by Senator Stevens to provide $200 million in new loan authority to CDQ groups under the 1998 AFA CDQ loan program. Senator Stevens’ amendments allowed CDQ loans to have terms of up to 30 years and to be used in any of the BSAI fisheries, rather than just BSAI pollock. Subsequent amendments were made by Congress in 2006 (section 416(c) of P.L. 109-XXX (the 2006 Coast Guard Authorization Act)) to, among other things, clarify that the CDQ loans can be used for “the purchase of all or part of ownership interests in fishing or processing vessels, shoreside fish processing facilities, permits, quota, and cooperative rights.” NMFS has just begun to reactivate the AFA CDQ loan program and to incorporate these changes from 2005 and 2006.

Congress recently enacted comprehensive amendments to the CDQ program in the Magnuson-Stevens Act, based on the Rasmusen Blue Ribbon report. The amendments were requested by the four CDQ groups who represent 96 percent of the Alaskans participating in the CDQ program (BBEDC, CVRF, NSEDC, and YDFDA). The amendments (see section 416(c) of the 2006 Coast Guard Authorization Act (P.L. 109-241)) made the following changes to the CDQ section of the Magnuson-Stevens Act: